The Butterfly In The Graveyard 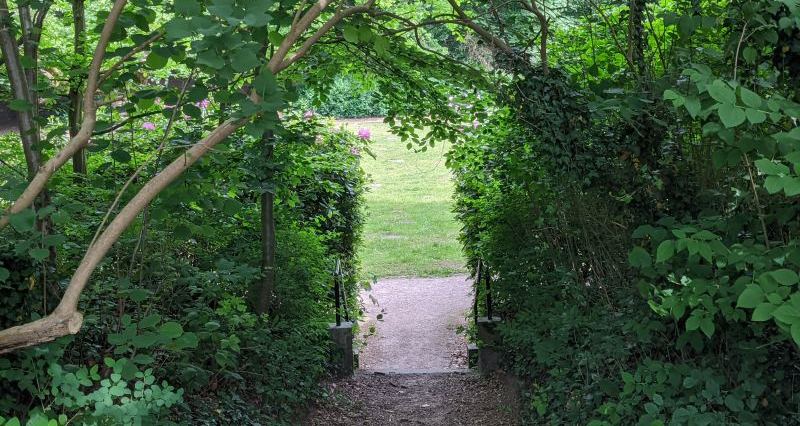 Close to my home, there is this park that used to be a graveyard. Once all the graves were full, the city council planted grass everywhere, put a number of benches about, and declared it to be a park.

I enjoyed visiting it to work on my book. I liked that very few people ever visited the park. I also liked the earthy smell of the park, the way the light splashed bright patterns on the floor, and most importantly, the many butterflies.

I’d sit every day on one of the green benches with my notebook, scribbling out ideas for my book. I was writing a study on butterflies, with special focus on the Graveyard Princess - a rare, double stripped large butterfly that was only found close to graveyards.

I had been working on the book for a very long time, but I was not getting very far. I had ideas, lots of ideas, scribbled all over the pages of the book, but it was hard to make the thoughts coherent.

My home was nearby, a small, cosy house I bought with the money the insurance had paid me after I fell of a stool at the university. I enjoyed my job as a professor, but getting a few hundreds of thousands all at once meant that I could retire early. I found this little cottage, rented it, and lived off the interest that 353,000 dollars in the bank gave me.

My only ambition was to finish the book, and get published by one of the major science presses. I wanted to tell the world about how the Graveyard Princess butterfly has built a symbiotic relationship with the mice that live under the gravestones, and how different their growth journey is from other butterflies. I wish I were skilled enough to capture the grace of their flight, and describe how the sunlight dances with them as they flutter over the scattered gravestones.

But instead of writing, I’d walk around the park, searching for butterflies and making up stories for the various names on the gravestones. I had long, fantastic tales about how they lived, each story long enough to be a book on its own. I’d get lost in long moments, looking at little flying butterflies wandering about.

I remember the day I first saw her. I arrived at the park, sat on the bench and got my sandwich out. The bread was still warm, the ham smelled delicious. I took the first bite, and raised my face to the sunlight and let it pour across my face.

I opened my eyes, and she was there. A young girl with dark, stringy hair, standing all alone, dressed in old-fashioned clothes. She looked directly at me without saying a word. She was maybe 8, maybe 9 years old? I’ve never had children, so I can’t really judge the age of children.

Her big, dark-ringed eyes stared at me. Then she stepped towards me in strange, jerky and unnatural manner. I felt a chill come over me. My heart pounded. I pulled my notebook to my chest instinctively. I yelled out, half to her, half to anyone that was near and could rescue me: “What do you want?”

She turned and ran off. Her running was odd.

The park seemed to have got darker, and it looked like it would rain soon. I got my stuff and quickly left the park back to my home.

That night, as I lay in my bed, I thought about that strange girl. I had never seen her before - and what was a girl that young doing alone in a graveyard park? I knew that people avoided the park for a reason, but the very thought of ghosts was silly. It was probably just a lost, little girl who was more scared of me. And I had actually yelled at her. She probably ran home to tell her parents scary stories about the horrible man in the park.

I resolved to apologize if I ever met her again.

I did not see her again, though I kept watch. I looked closer at every child who wandered through the park, but most had that blank, innocent look that normal children have. None of the dark, haunted look that I remembered. I even strode quicker once to look at the face of tiny old woman creeping through the park, and she looked back with two tired eyes in a sea of wrinkles. I apologised and left.

I sat at my bench weeks later, examining a giant butterfly perched on a bent twig, when a small voice beside me spoke: “What type of butterfly is that?”

I startled backwards, my heart thumping. Beside me, the little girl sat, face white as snow, black stains on her face that looked like soot.

My voice caught in my throat. It seemed like the entire park had gone silent. I could not hear a single bird.

I answered, my voice a bit shaky. “It’s a red monarch butterfly, very close to the end of it’s life cycle, you can see that by the characteristic loss of the tactile setae on the outer wing edges”.

She was silent for a while, looking down at the butterfly.

When the church bell rang at 6pm, she jumped off the bench and ran away, leaving me mid-sentence.

Now that I had time to observe her, I saw that the reason she moved so jerkily was that she had probably broken a leg sometime in the recent past. It had not healed well, almost like she had never been taken to the hospital.

I was pleasantly content, in a mellow sort of way. It had been so long since I spoke about butterflies to anyone. She had been fascinated, she had asked questions in her small light voice, and had laughed loudly when I told one of my many butterfly jokes.

I enjoyed the day. I hope she enjoyed it too.

She came back the next week, and I showed her more insects in the park. We went through the trees, discovering butterflies. I showed her how the moths hid themselves, and where the termites had their little nest. We walked through the park, like father and daughter, I did most of the speaking, while she asked all of the questions.

Soon she was coming almost every day to visit. I barely wrote anymore, most of the time, I’d just wait for her to come the graveyard, so I could explain to her.

She did not tell me much about her home, but sometimes she came to the park with a swollen lip. Once I asked her how come her parents let her leave all the time, and all she said was: “They are long dead. And my uncle does not care what I do during the day.”

She grew older. She became a teenager. Quiet, smart, fierce. She loved the insects almost as much as I did. She brought books to me, we studied them together.

Maybe I was supposed to be a talker, not a writer. I was not writing, but it was the happiest time of my life.

In the evenings I would read my textbooks, and look for something interesting to prepare for her the next day. I’d draw out parts of the park we could visit, and what little creatures we would discover.

And I’d wake up every morning happy.

One day she told me she would be leaving to the university. She would be studying Botany. I stood, up prouder than any father could ever be. I admit it, I cried.

I remembered how she was when she arrived. A small bony child with the haunted look. Now she was a thin, tall teenager, fiercely intelligent.

She’d be fine out there in the world, I knew.

I asked her if I should take her to the train station. She looked at me curiously, and answer: “We both know you can’t do that.” We both smiled and I did not ask again.

When she left, I continued to visit the park every day. But it was not quite the same. The place felt dim, there were fewer insects. I continued to scribble my notes, but explaining them had made me feel so alive. Having someone to talk to had really made a difference.

But I kept coming back every day, kept trying to put words to my book. But it was even more difficult now.

She came back after seven years.

Her hair was bright red. There was sparkle in her eyes, and bounce in her step. She smiled often and easily now. Her face was no longer thin, and her stomach was big with child.

She sat beside me on the green bench, silently, like the first day we met. Then she wordlessly brought out a book - on it was a picture of a butterfly on a green bench. The title was bold: “A study of graveyard butterflies”. Her name was first, and below that, my name. Co-author, John Walter.

I smiled the happiest smile of my life. She reached across the bench and hugged me - the first time she had ever touched me. In that moment, I saw the park as she saw it, it was bright, colourful, filled with people running around and screaming. Cars honked, and all around was the loud buzz of a city.

We walked one last time around the park. We stopped at a certain gravestone, I had never noticed, or maybe never wanted to notice. Professor John Walter - 1950 to 1983.

Satisfaction flooded my body, and I felt like everything was right about the world. I had finally written that book - and my name was going to live on. Someone would remember me.

The park started to fade, and the last thing I saw was a large butterfly landing on the corner of my gravestone.